PORTO: THE HISTORY OF ITS BRIDGES

The Ribeira riverfront is the heart of Porto. From here the boats depart. From here you can see the port wine houses in Gaia. From here the Douro winds its way down the valley which its wine made famous, towards Foz and the sea. Looking up and downriver, you can see the bridges that bring both riverbanks together. There are six in all, each with their own history. Shall we cross?

Luís I Bridge
Everyone is impressed by this bridge. It seems to be the most commonly photographed of the bridges over the Douro, according to a merely visual statistic. This sturdy bridge once had the largest wrought-iron arch in the world at 395 meters long. It is beautifully detailed; its intertwined, almost filigree-style decoration becomes clearer on closer examination. It was designed by the Belgian company Société de Willebroeck, who entrusted the work to engineer Théophile Seyrig, Gustave Eiffel's disciple. It was opened in 1886, after five years of work, but with only the lower deck in operation. Two years later, vehicles began using the upper deck, until, in 2003, after maintenance work, vehicle traffic was replaced by the light rail network.

Long before becoming part of the city’s infrastructure, there was another bridge across the river; the Suspension Bridge, also known as the Maria II Bridge, was the first metal bridge in Portugal. It was opened in 1842 and demolished in 1887 to make room for the current one, which always enchants people when they first see it. The Luis I Bridge is lit up at night, and takes on a yellow glow, which gives it a dramatic, cinematic, romantic feel. It is not quite the Brooklyn Bridge, but is often the backdrop for romantic proposals.

Infante Dom Henrique Bridge
Upstream, another bridge was built in 2003, named after Porto-born Henry the Navigator who opened up new worlds during the Age of Discovery. With its clean lines, its 280-meter arch span set a new record for this type of construction and served as a model for many other bridges built around the world. Twenty meters wide, with four lanes, two in each direction, it received the traffic diverted from the upper deck of the nearby Luís I Bridge after the opening of the light rail network.

It takes vehicles between Fontainhas and Serra do Pilar with its monastery, a 16th century building and classic of European architecture renowned for its church and circular cloister. This was the home of the exclusively male order of Saint Augustine. After the abolition of religious orders, it assumed a military function, given its strategic position at decisive moments in the country’s history, such as the French Invasions, the Siege of Porto and the Maria da Fonte revolt. It is a classified National Monument and is on the UNESCO World Heritage List. It has stunning views over Gaia, Porto and its bridges. 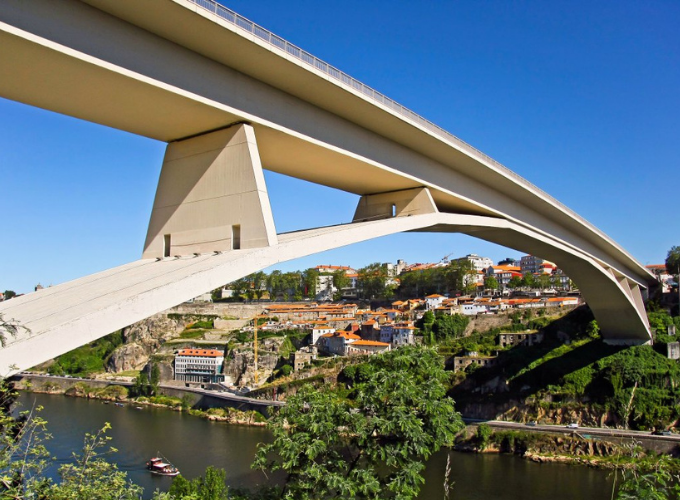 Maria Pia Bridge
While Paris has the Eiffel Tower, Porto has the Maria Pia Bridge which was also designed by the famous French engineer. Gustave Eiffel (1832-1923) considered it to have been constructed ‘‘at the limits of classic metal construction”. The ingenuity involved made it an engineering landmark and involved the use of revolutionary methods for the time.

The purpose was to establish a rail link between Gaia and Porto, which it did successfully for 114 years. While it was officially opened on 4 November, 1877, by King Luis I and Queen Maria Pia, who gave it its name, the bridge had in fact already been crossed before on foot by the wife of the Portuguese engineer responsible for the work, Pedro Inácio Lopes, right after the bridge’s metallic arms had been put in place to complete the deck. By her brave and rather foolhardy act, Adelaide Lopes went down in history [Caminhos de Ferro Portugueses – Esboço da História (1956)], although the comical episode is barely mentioned elsewhere.

Railway traffic ceased in 1991 and was diverted to the nearby São João Bridge. Its towering 61 metres of line were, however, declared a National Monument.

São João Bridge
With its single lane and limits on loads and speed, the Maria Pia Bridge was replaced by the more modern São João Bridge on 24 June 1991, named after the patron saint of the city’s summer festivities. This bridge is made from reinforced concrete, minimalist in structure and painted white, unlike all previous ones. It is not arched, but consists of one continuous multi-lane span, supported by two majestic pillars set into the riverbed. It connects Porto-Campanhã train station to southern destinations, the first stop being Vila Nova de Gaia.

Arrábida Bridge
This bridge carries the A1, the motorway connecting Porto in the North to Lisbon, and links Campo Alegre in Porto with Arrábida in Gaia. Designed as an alternative downstream crossing because of traffic congestion on the Luís I Bridge, it was the first major bridge over the Douro built by Portuguese companies, under engineer Edgar Cardoso (1913-2000), who was also responsible for the São João Bridge and the expansion of the runway at Madeira Airport. On the pillars in the central deck area, which once functioned as lifts, are four modern bronze sculptures by artists Barata Feyo and Gustavo Bastos.

The bridge’s reinforced concrete arch was the largest in the world at the time it was constructed in 1963. Since 2016, for those bold enough it has been possible to climb the 262 steps to the top of this National Monument which stands 65 meters from the riverbed. From here you can see: the nineteenth-century Customs House on the north bank, once Miragaia beach and now an important congress centre; the Port Wine Museum, housed in an 18th century building that was formerly a wine warehouse; the Church of Massarelos, with its blue tile panel and figures of Henry the Navigator and St Elmer, the patron saint of sailors; and the STCP-Tram Museum, which preserves the history of the city's iconic urban transport. From this bridge the Douro flows into the sea at ​​Foz. On the south side, picturesque São Pedro da Afurada is typical of the region’s fishing villages, where the population is still dedicated to boat building and repair.

Freixo Bridge
This the most modern of the six bridges, on the outskirts of the city, and was opened in 1995 to solve the problems of traffic congestion. It formed the final section of the inner ring road and opened up new access southbound. As the city's entry and exit point, with four lanes in both directions, an average 100,000 cars cross it every day. In fact, it is made up of two bridges only ten centimetres apart for the 750 meters of its length. 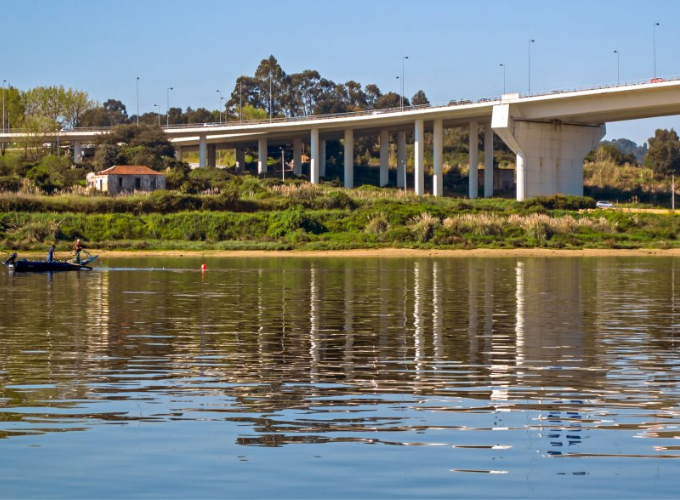 There are various ways to cross the bridges - by car, on foot, by train, by metro, by bicycle or even by climbing between the pillars - but perhaps the most enjoyable of trips is by boat, from the Ribeira riverfront or the quayside at Gaia. This gives you time to appreciate them in all their uniqueness, while you consider other ways to become more familiar with the cities on either bank, as Sophia de Mello Breyner Andresen, the city’s most celebrated poet, does in Livro Sexto (2014):

"One by one the boats set out to sea

Cutting through the waters smooth as a polished floor

And all the gods are once more invoked

Beyond the ruins of their temples”

From the Porto side, the wine houses stand out by the letters on their roofs: Calem, Kopke, Quinta do Noval, Sandeman, Gran Cruz, Taylor’s, Dow’s, Offley... From the Gaia side, enjoy the view of the colourful old houses, the church towers and the historical centre with its World Heritage status. On the River Douro itself, the rabelos, the boats which transported the wine barrels downriver to the Port houses in former times, delight visitors as they compete with other tourist craft in Portugal’s second city, which continues to enjoy its status as one of the best travel destinations in Europe.

Come and discover them!