17 hidden gems you must visit in Funchal

In Funchal there are no ugly views.

It is a city for all ages, for all tastes. It has the rare human touch of a city where people still greet each other on the street.

It’s a city to be enjoyed at a slow pace. At every nook, cranny and corner there is a pleasure of discovering something unusual. You will be embraced by the ever lasting sunlight and walk under the bluest sky you can dream of. Everywhere there is the exuberance of colour and the pleasure of observing the flowers in full bloom.

I usually say, that it is difficult to get to know Funchal well in one week. Although I was born and live here, I often feel I have not figured out every hidden corner of this city, such is its rich heritage.

The more I know this city , the more I realise there is so much to discover about this place. It was this same curiosity that led me to uncover these hidden gems that could easily go unnoticed to the common visitor.
It would be a shame to miss out on such sights so I leave with you a list of my hidden gems of Funchal:

1. The noble rooms of São Lourenço Palace
This national monument is open to the public free of charge and throughout the visit you’ll be able to admire the beautiful rooms of this Palace. You can visit the room of portraits displaying paintings of the first governors of Funchal, such as João Gonçalves Zarco. In the ballroom you’ll see a stunning ceiling decorated in gilded stucco and in the Red Room you’ll discover amazing French furniture. In the Green Room you can find beautiful painted panels depicting scenes of Madeira by Max Romer, a German artist who lived on the island between 1922-1960.

2. Orchestrofone in Quinta das Cruzes Museum
The Orchestrofone in Quinta das Cruzes Museum is just one of the valuable reasons for visiting this museum. This rarity in the world of mechanical musical instruments, was manufactured by Limonaire Frères in France and brought to Madeira by Viscount Cacongo. It was acquired in 1900 at the International Fair of Paris. Its purpose was to entertain the balls and garden parties with waltzes and polkas. As one hears the music playing out from this box of wood, we are virtually transported back to the Belle Epoque era. Take the opportunity to visit the museum and its rich collection of art, including Portuguese furniture, jewellery, ceramics and sculpture.

4. São Tiago Beach
Right next to the Hotel Porto Santa Maria lies the small São Tiago Beach, a true invitation to dive into the sea bay of Funchal. There is also a small beachside bar to stop for a coffee or a drink while admiring the beautiful ocean views.

Address: Next to the São Tiago Fortress

5. The Wall of Funchal
The defensive fortification of Funchal began in 1560 after a big attack from French pirates. In the late XVI century, Funchal was surrounded by walls. It is believed that there were five gates and points of entry in the wall of Funchal. One of them can still be seen at Largo dos Varadouros and although this is a reconstruction of the old entrance to the city, the crown, the royal arms and tombstone are the original parts. In the Santa Maria district, the wall was developed along the sea and very few sections of it remain today. You can still see one part of the wall just outside the Hotel Porto Santa Maria.

7. Carne de Vinho e Alhos sandwich at the Farmers market
Besides the famous beef espetada, madeirans love Carne de Vinho e alhos - a wine, garlic and pork sandwich, mostly served at the Farmers Market. This is one of the most treasured meals for locals who flock here each Friday to savor this treat at dawn after finishing their weekly shopping. This typical dish is made of pork meat prepared with white wine, bay leaves, vinegar, salt, pepper and garlic, served on the local bread- Papo-seco. It is usually washed down with a cortadinho - a coffee with a "touch of brandy" to start the day with a nice kick.

8. Campo da Barca Garden
Located on the left bank of the small river, ‘Ribeira de João Gomes’ is a beautiful garden that harbors ancient trees such as the Jacarandas ( Mimosifolia Jacaranda), the Silk Floss tree (Chorysia speciosa) and a huge dragon tree (Dracaena draco ssp. Draco). People come here to rest under its shade and enjoy a picnic lunch. In the centre of the garden there is a lovely bronze statue, designed by the master sculptor Pedro Anjos Teixeira. The status is a homage to Madeiran florists. Unbeknown to even locals, the garden is a popular place for game lovers and you will find people playing cards, chess or even dominos.

9. Casa de Santana in the botanical garden
There’s no need to go to all the way to Santana to observe the Casa de Santana, the typical house of Madeira. In the botanical garden of Funchal, hidden amongst its trees and beautiful flowers, you will discover the famous triangular house standing with its red door, green windows and a thatched roof. Although you cannot visit the inside of the house, can you still cherish the memory of one of the most emblematic gardens of the city. The variety and natural beauty of the plants as well as the surrounding views are the perfect recipe for a morning well spent.

10. Chapel of St. Anthony of Mouraria
Right next to Rua da Alfandega there is a small chapel, which was built in circa 1710 by order of the local judge João de Aguiar (where he would end up being buried). Besides having a beautiful portal, (one of the first example of Baroque architecture on the island) it also has a door inscription saying: Ad Salem Sun supposed to be alluding to St. Anthony; known as the sun of the Western Salvation. Inside you can admire the old staircase that dates from the XVII century. The staircase leads to the main floor of the Legislative Assembly (Old Customs hall of Funchal).

There is also a beautiful altarpiece in the baroque style with a picture of St. Anthony and the child, from the XVIII century. One curiosity of this chapel is the gravestone which was desecrated with the following profanity: ”Here lays the miserable sinner John Aguiar, Judge provider, which was on this island ..."

11. ‘Pleasure Houses’
As you walk along Funchal, you’ll notice the so called ‘pleasure houses’, a prominent place in the garden of Madeiran houses from the XVII and XVIII centuries. The windows are made of wooden slats, locally known as bilhardeiras. These ´pleasure houses´ were a kind of a hidden sanctuary where local ladies could gossip in privacy without being observed, thanks to the protective windows. Even though it was no wooden slats, one of these houses is located in the garden of the House-Museum Frederico de Freitas, but you’ll notice several of them scattered throughout the city.

There are several restaurants nearby where you can taste delicious limpets as well as other local fish dishes.

Address: Access is via a staircase in the Lido Promenade to the Formosa Beach.

13. Museum Henrique and Francisco Franco
If you are an art lover like me, you will love this small museum which displays the art work from two Madeiran brothers, Henrique and Francisco Franco. Here you can admire Henrique Franco´s (painter, 1883-1961) beautiful oil paintings and prints of local Madeirans while Francisco Franco (sculptor, 1885 -1955) was more known for his expressive sculptures and drawings . In the streets of Funchal you can also find some of this work including the imposing statue of Gonçalves Zarco, the Governor of Funchal, right next to the São Lourenço Palace.

14. Cemetery and English Church
Despite being mostly Catholic, Madeira island has an Anglican Church based in Funchal, more precisely at the amusingly named street- Break-Back Street. It was built in 1820 on the initiative of the English Consul , Henry Veitch. Its style is neo-classical and it is surrounded by beautiful gardens. In the neighborhood you will also find the English cemetery where some notable personalities are buried, including Paul Langerhans. He was a physician and researcher whose name will be forever linked to medical history as the man who named the pancreatic islet producing insulin- the "Islets of Langerhans". This cemetery was the place he had chose to be buried as was described by him as a "real cemetery, secluded and quiet, a good place to rest."

15. Santo António Factory
One of the symbols of Madeira is our sugar cane honey cake. Do not leave Madeira without savoring this local treat. Situated in the city centre, at the Santo António factory you can discover other local delicacies such as fennel candy, passion fruit jam and the sugar cane honey cookies. Founded in 1893, the in-house shop displays century old objects including old biscuit tin boxes. This is a place full of sweet traditions not to be missed while visiting Funchal. 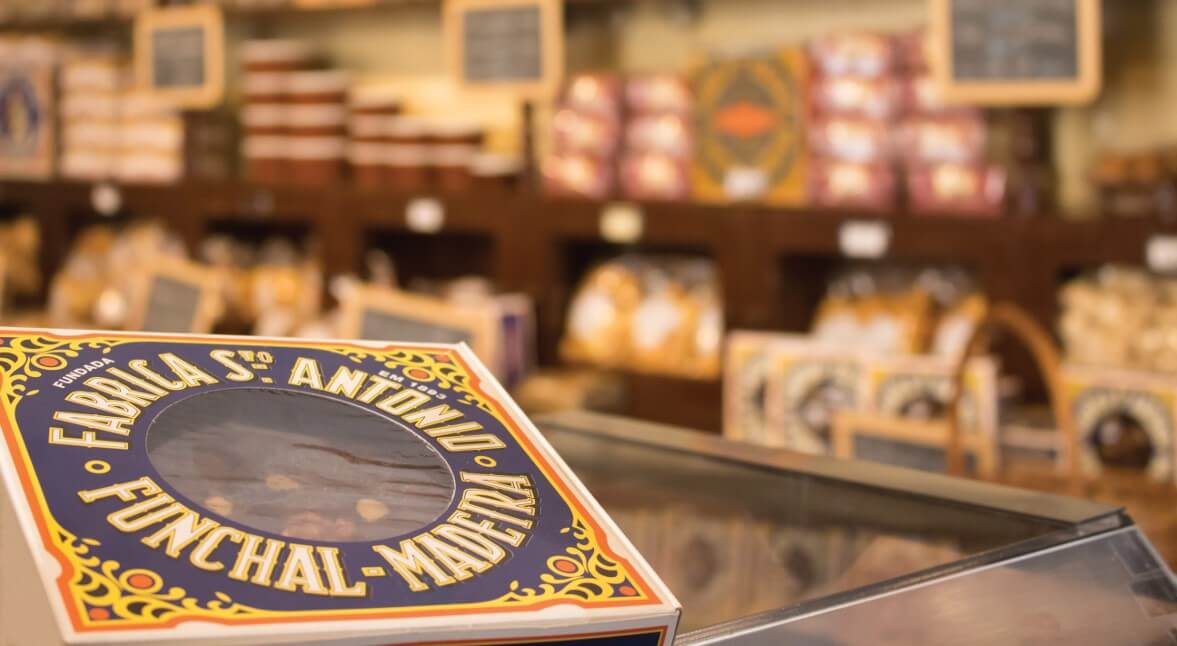 16. Cais do Carvão
Also known as "Pier Wilson", this coal pier "Cais do Carvão” built in 1903 was owned by the company Wilson & Co Ltd. At that time, steamships crossing the Atlantic stopped to refuel in the coal port of Madeira Island enroute to Africa or America. It is said that it was always a major event to witness the boat dock in the island: observing the hustle bustle of this scale that included the change of clothing; the white robes of Africa replaced by a formal suit, to match the grand final destination - America. In 2004, the Marine Biology Station was built here but you can still find the ruins of the Coal Pier, as well as some rusted parts of machinery from those times.

17. Livraria Esperança
The history of this library begins in 1886 thanks to a Jacintho Sousa Figueira who was devoted to the typographic arts and bookselling. One of the particularities of this library is to present the books front cover exposed and not sideways as usual, a unique way to display its 96 000 copies. This was the first bookstore of Funchal and is the largest library in Portugal.

in the heart of town

Have you ever felt the experience of being in a place, where all the elements around you magically combine, together, in perfect harmony ?

Living and reviving a holiday in Funchal is also gathering bits and pieces of memories.

5 walks you can’t miss in Madeira

Madeira is an island of many walks. There are trips to the seashore, mountains, flower gardens, pebble beaches, forests and levadas.