At table with the chef It looks like a stage set. In the centre of the room is a structure that is a little like a table and a little like a kitchen counter. Actually it is a combination.

At table with the chef

It looks like a stage set. In the centre of the room is a structure that is a little like a table and a little like a kitchen counter. Actually it is a combination of both. It’s the new Chef's Table. This is the experience that the Il Gallo d'Oro restaurant in Funchal, with its two Michelin stars, has been providing since its reopening.
The show can be enjoyed from any table in the restaurant's refurbished dining room. But the Chef's Table was designed to provide a different experience for customers who sit right next to the food preparation area; they can smell the aromas first hand, ask questions, and appreciate the work that goes into making each dish.
Up to four people can sit at this table, available by reservation. Customers can watch various cold dishes being prepared, the finishing touches or the service. This is live cooking, supervised by Chef Benoît Sinthon or a member of the team. But it also opens up the kitchen to everyone.
Il Gallo d'Oro has long been breaking down barriers between the dining room and the kitchen, following the maxim that the customers trust what they can see. The team is used to being in the dining room, or having guests in the kitchen. Some dishes are still finished off at the table, next to the customer. 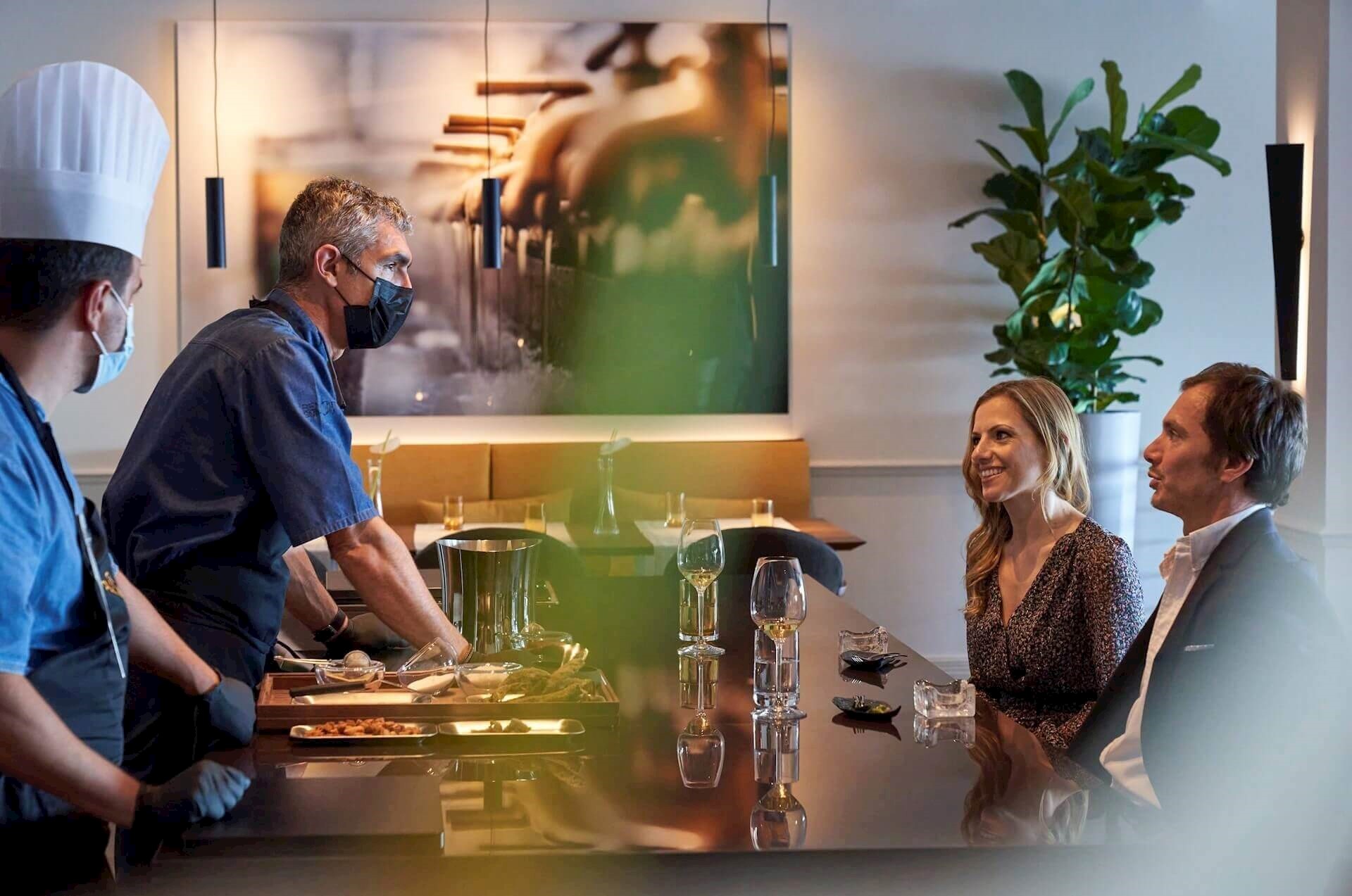 On reopening, Il Gallo d'Oro offers two menus. One of them is the Top Experience which combines produce from various regions of Europe with ingredients from the island of Madeira. But the big news is the Terroir Experience menu, which is a bold new step. It is a gastronomic experiment with the flavours of Madeira. And boldness is just what is required! If you thought serving limpets, skewers or black scabbardfish in a Michelin restaurant was a challenge, then preparing an entire tasting menu with regional produce is an even bigger one.
But it was a calculated risk. The promotion of Madeira's produce by Benoît Sinthon and other chefs, and their work with producers to increase quality, have allowed traditional flavours to be transformed into high-level culinary offerings. "It's no longer about showcasing regional produce, because we were already doing that," explains Benoìt Sinthon. "It's gastronomy based around regional produce".
And the menu strikes a fascinating balance: it captures traditional flavours, but does not become a slave to the concept of tradition. It innovates, creates, builds, or if you prefer, it deconstructs flavours.
One example is the dish Lapas da Madeira, where everything has a taste of the sea, from crispy limpet to escabeche of limpets, by way of powdered limpets and the mollusc itself. It's as if it had just been prized from a rock lapped by the ocean.

Benoît Sinthon explains that it is a matter of "valuing the best of what Madeira has to offer". And the 7-course menu includes couscous, corn-on-the-cob, honey, sugarcane honey, honey cake, the inevitable Madeira wine, rum, cider, limpets, black scabbardfish, trout and coastal fish. It is "a tribute to Madeira, which has given me so much", he confesses.
But there is also black scabbardfish in three different textures: a scabbardfish caviar with banana heart, banana and mango purée and smoked scabbardfish, or a panna cotta with scabbardfish. This is another taste explosion, in a dish featuring Madeiran corn-on-the-cob and even lupin beans.
The menu also offers meat on skewers, perhaps the most iconic of Madeira's dishes. In this high level recreation, finished off next to the customer, there is the aroma of bay leaf that reminds us of traditional cooking in the Madeiran countryside.
A rainbow trout or fresh fish of the day is also available, as well as a dessert with all the flavour of the tropical fruits for which Madeira is so well known.

But how do you explain to customers who don't know the traditional flavours and aromas of Madeira what to expect? Benoît Sinthon asserts that "customers like to experience the island's flavours" and that "there is a growing audience who wants to find out about our culinary traditions".
Throughout the experience there is no shortage of wines, selected by sommelier Sérgio Marques. There are some surprising pairings to be had, with a predominance of white wines with good acidity, some from old vines and different regions of Portugal. These choices enhance the flavours of the dishes. Some even go with more than one wine, as in the case of the dish Espada da Ilha 2021, for which Sérgio Marques suggests a Madeiran white made from Verdelho, and a Madeira made from the Sercial varietal.
The menus will be adjusted according to the season "and our creativity". Il Gallo d'Oro has room for 30 seated per night.

The dining service is still viewed as a ritual that enhances the experience. There are, for example, four types of butter: unsalted, with garlic and parsley, cuttlefish ink, or kale and Madeira wine. Or there is fleur de sel flavoured with fennel or ginger.
All of this is accompanied by various types of bread; pumpkin bread, plum bread, or focaccia with peppers and anchovies, served from a wooden box that opens to reveal some real surprises.
There is also a carousel from which you can choose the petit fours that accompany the coffee, or tea made from fresh herbs, also chosen from a box. A gastronomic experience made up of many details!

Watch the video of the 'Stay Classy' vloggers experience at the Il Gallo d'Oro restaurant . ..

The Cliff Bay with a new look!

The intervention focused on the rooms, reception, lobby and the restaurant Il Gallo d’Oro, with 2 Michelin stars.