The streets fill with decorations, people rush to the shops and markets to buy presents, and patisserie windows are filled with cakes and sweets that can only be enjoyed at this time of year. .. Make no mistake: December is the month of festivities and Christmas is just around the corner!

Whether it’s Lisbon, Porto, the Algarve, Madeira or Brazil, Christmas is celebrated and experienced in different ways with different traditions.

Salt cod or king cake ? Midnight Mass or the Saint Silvester Run ? Going to see the lights or visiting all the nativity displays in the city ? There are so many places to stop off we don't know where to start. ..

One thing’s for sure: no one is immune to the approaching festivities! 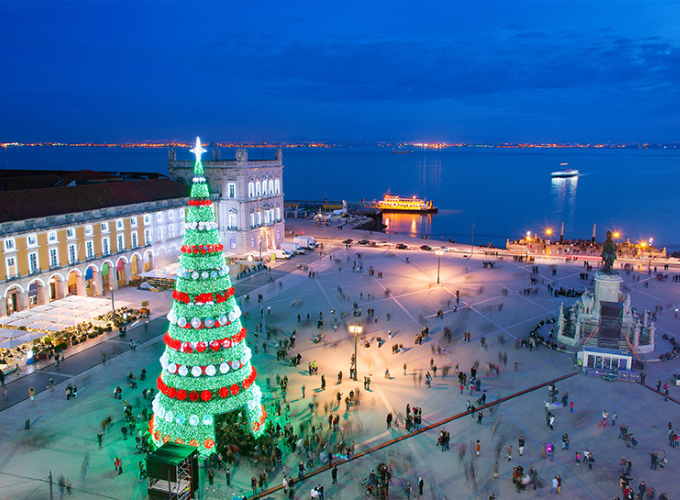 - Walk down Avenida da Liberdade to the Chiado to see the Christmas illuminations;

This is a Christmas outing that few Lisboners pass up. The Christmas lights on Avenida da Liberdade are some of the most beautiful in the city and delight children and adults alike.

As we are in a prime location all year round, our PortoBay Liberdade enjoys the festive atmosphere of Christmas even more!

The famous ‘King Cake’ has a special place in Portuguese Christmas celebrations.

It is a crown-shaped cake, covered with candied fruit and nuts that is prominently displayed in most pastry shop windows in Lisbon. Traditionally, King Cake had a surprise gift and a fava bean baked into it - the person who found the bean had to pay for next year's cake!

- See the Christmas Tree in Terreiro do Paço square;

In December, the huge square next to the river called Terreiro do Paço takes on a festive atmosphere with a huge 25 meter high Christmas tree, full of coloured lights and sparkling decorations.

You can see it glowing until the 5th of January.

Some practising Catholic families go to Midnight Mass on the 24th December. In Lisbon, midnight mass (Missa do Galo) is held at 11pm or midnight and only after the mass is Christmas dinner eaten with the family.

— Do some shopping at the Christmas Markets;

This is a must-see for anyone who likes to get away from shopping centres and the great consumer rush.

The city is filled with markets of different sizes, perfect for getting even more into the spirit and buying original gifts and souvenirs. The Chiado Market in the Armazéns do Chiado, Wonderland Lisboa in the Edward VII Park and Rossio Christmas Market in Praça Dom Pedro V are great starting points. 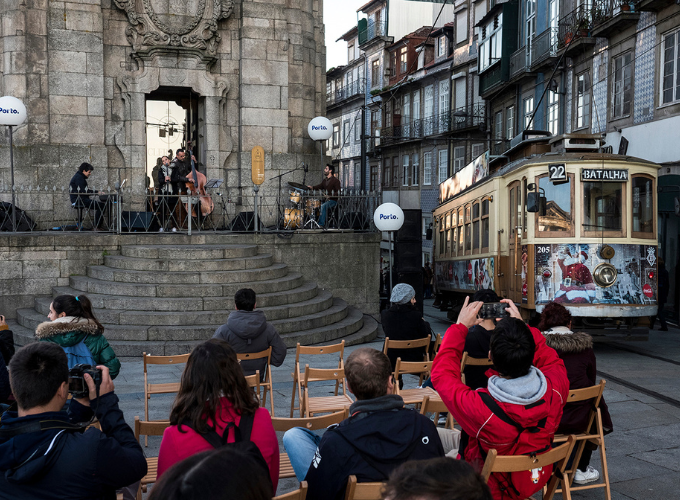 One visit not to be missed is to the magnificent and gigantic Christmas tree erected in front of the Town Hall.

— Concert in the Clérigos Church and Tower

The most dazzling Christmas concert in Porto is held by the Brotherhood of Clerics who perform concerts played on the Tower's carillon. The concerts are free of charge, and give you the opportunity to enjoy a view over the city from the Torre dos Clérigos!

In the Church of São José das Taipas, one of the most iconic Christmas wonders in Porto is the beautiful 18th century nativity scene.

Thirty minutes from Porto, in the parish of Lagares, Penafiel municipality, is the preserved rural village of Quintandona. The village conquers people's hearts with its typical charm and the beauty of its houses. During the festive season, it turns into a true Christmas Village!

Tradition dictates that New Year's Eve is celebrated on the Avenida dos Aliados, in front of the city hall. It is well-known for its dazzling and creative firework display!!! 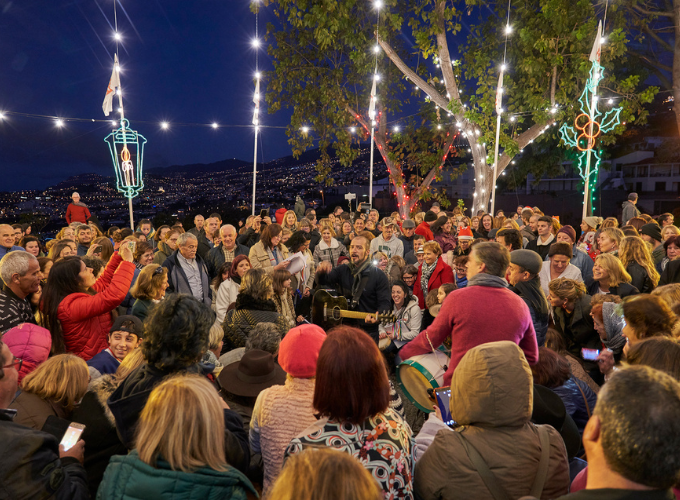 — See the lights in Funchal;

The Christmas lights are switched on in the city of Funchal on 8 December and illuminate the city until mid-January. Make a visit to the island and you’ll be enchanted by the natural beauty of Madeira. ..

— Go to at least one Childbirth Mass;

The Childbirth Mass is one of the main traditions on the island. Since it celebrates the nine month pregnancy of the Virgin Mary, it starts 9 days before Christmas, on the 16th of December, and ends at sunrise on the 24th of December with traditional songs.

— Take a walk on Market Night;

The famous Mercado dos Lavradores opens its doors on the night of 23 December to welcome thousands of people for one of Madeira's favourite celebrations.

All the bars in the area are open all night serving traditional drinks and the delicious "carne de vinha d'alhos" sandwich traditionally served at Christmas time.

A festival full of music, dancing and lots of traditional treats!

This is a traditional road race around Funchal that takes place every year on 28 December. As one of the oldest races in Portugal, it welcomes thousands of athletes of all ages, eager to run around the city.

This incredible spectacle on 31 December lasts about 20 minutes and spreads across different parts of the city.
As well as being one of the island's biggest tourist attractions, it was recognised by the Guinness Book of Records in 2006 as the "biggest firework show in the world", a title it kept until 2012. Unforgettable, don't you think?

Christmas Traditions in the Algarve 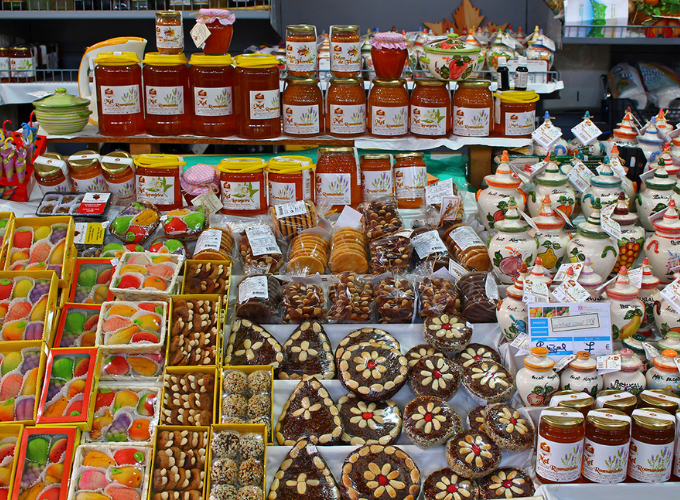 The Algarve's most important religious festival begins on 7th December in Quarteira, with a candlelight procession in honour of Our Lady of the Conception to the Church of São Pedro do Mar, the patron saint of fishermen. On the 8th
December a mass is held at 2 o'clock, followed by a procession to the sea to bless the fishermen and their boats.

All of the figs harvested and put out to dry in September suddenly reappear, especially for Christmas. They may be flattened or star-shaped, decorated with almonds or covered with sugar and cinnamon. Does that sound mouthwatering ? Along with the figs, try the fried dough "filhoses", "gila" puff pastries, almond pastries and dried fruits from the region.

Between Christmas and Twelfth Night, tradition dictates that you go out into the street to sing the "janeiras" (traditional Christmas carols), and receive some kind of reward in return. Another Christmas tradition in the Algarve are the "charolas", groups of musicians who sing songs about the birth of Jesus and the Wise Men.

The traditional "mountain" nativity scene, common in many places in the Algarve countryside, is built on a staircase: on top is the baby Jesus, and the throne is adorned with embroidered linens, dried crop shoots, flowers and oranges of the Algarve.

From 7 to 31 December, an event named "Albufeira Natal" is held in downtown Albufeira, where you can skate in an amazing ice rink, and get into the Christmas spirit with a park covered in snow, an ice ramp, a snow globe and an area just for children.

— See the Christmas tree in the Parque Villa-Lobos.

It’s 52 metres high with a star 4 metres in diameter on top: this is the enormous Christmas tree that lights up São Paulo. The base of the tree also has a scene with polar bears, soldiers, ballerinas and bells.

These convoys have six trucks that drive around different parts of the city, with the tree in Villa-Lobos Park as their final destination. Each of the Christmas trucks has different attractions such as Father Christmas and his reindeer.

— Celebrate the New Year on the Avenida Paulista;

New Year's Eve on the Avenida Paulista is considered one of the most traditional in the country. As in previous years, the event will feature huge firework displays to see in the New Year.

— Walk under the São Paulo illuminations;

More than two thousand illuminated trees all over the city; that's a lot of lights to brighten up your walk! From Avenida Rebouças to Avenida Atlântica, 5-meter high Christmas trees will also be put in the city’s main squares. Christmas is undoubtedly one of the popular holidays for Paulistas !! 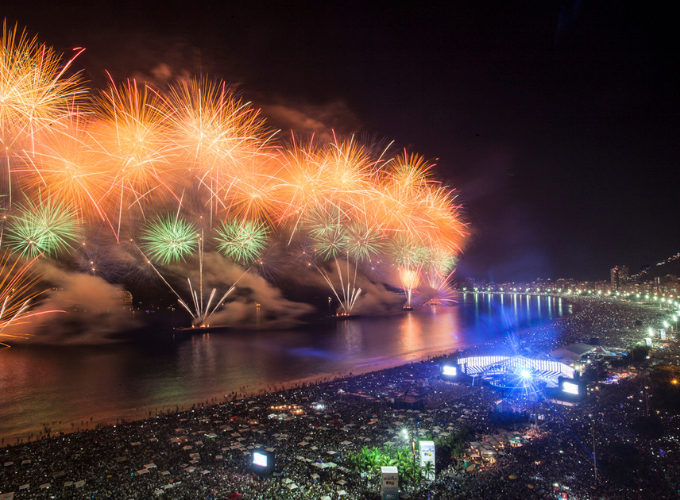 It may sound strange, but Rio’s citizens (cariocas) really like spending these 2 days in the company of family or friends . .. on the beach!! It's the height of summer and the beaches are full of people celebrating the season.
Prepare yourself: Christmas in Rio de Janeiro is spent in the sea, drinking coconut water.

Portuguese-style salt cod, the traditional cod patties, potato salad with celery, oven-roasted prawns. .. Cod ends up on most Christmas dinner tables in Brazil! Chester (similar to turkey in size and taste) is also a real Christmas delicacy for Brazilians.

— Go to the Nativity Scene Festival;

One essential part of Christmas is Natal Fest, a festival featuring huge life-size representations of nativity scenes. These creations are exhibited in the Jardim de Alah in Ipanema, and are contributed by various Brazilian artists to keep the tradition alive, year after year.

On stage in front of Copacabana or in the Leme district, New Year's Eve in Rio de Janeiro needs no introduction.
In addition to the enormous firework display, you can also count on live music and thousands of people dressed in white who gather on the beach to see in the New Year. A unique experience.

The small, bucolic town of Búzios may not have the big brands for Christmas shopping, but it is full of small, locally owned shops, perfect for finding original gifts that are completely different from the rest.

— Spend the day on the beach;

Just two hours away from Rio de Janeiro, Christmas Eve and Christmas Day in Búzios are spent in the same way as in the big city: on the beach, enjoying the sun and the fantastic weather!

What better way to celebrate Christmas than in the town’s crystal clear waters? Put on your diving goggles and get down amongst the coral and colourful fish.

On the beaches at Geribá, Brava or Ferradura, there is live music for all tastes and a firework display down by the seashore. Unmissable!!

— Visit the statue of Brigitte Bardot;

On her first visit to the charming town of Búzios, it was love at first sight for the famous French actress.
Brigitte Bardot eventually returned in 1964 to celebrate Christmas. To do justice to her memory this season, pay a visit to the bronze replica of the actress sitting gazing out to sea in Búzios.

Delicacies on show at Christmas in Portugal

Christmas is a time for joy, family and love and winter calls for dishes with substance and desserts that are sweet on the palate. ..

Whether it’s Lisbon, Porto, the Algarve, Madeira or Brazil, Christmas is celebrated and experienced in different ways with different traditions.

Are you counting the days to Christmas? How about making the most of the time and starting shopping and making preparations now? Making a calendar could help.