You can admire the Portuguese capital from the viewpoints located atop the city's hills. There are spots that provide breathtaking panoramic views. Some of them make you feel like you're on top of the world.

I never get tired of saying that out of all the countries I've landed in - on my last count a few years back, it was 41, plus repeated returns and countless cities, it's not even worth trying to work out the exact figure - Lisbon gets the award for the best cityscape. Controversies aside, like the noise factor for local residents and the safety aspects, bla, bla, bla, you can’t help being impressed when you fly in from the south - my favourite view - and can admire the coastal strip of Costa da Caparica and wave at Christ the King, cruise over the Ponte 25 de April bridge and glide across the entire city, or coming from the north, with the Ponte Vasco da Gama bridge on the horizon and a view of the entire eastern part of the city, reborn since EXPO'98 with its bold traces of modernity. Unless you ended up with an aisle seat, which is not the best choice when you have Lisbon as a destination. The light, the river, the history, all through the plane window.

Note: book a window seat to take in the views. 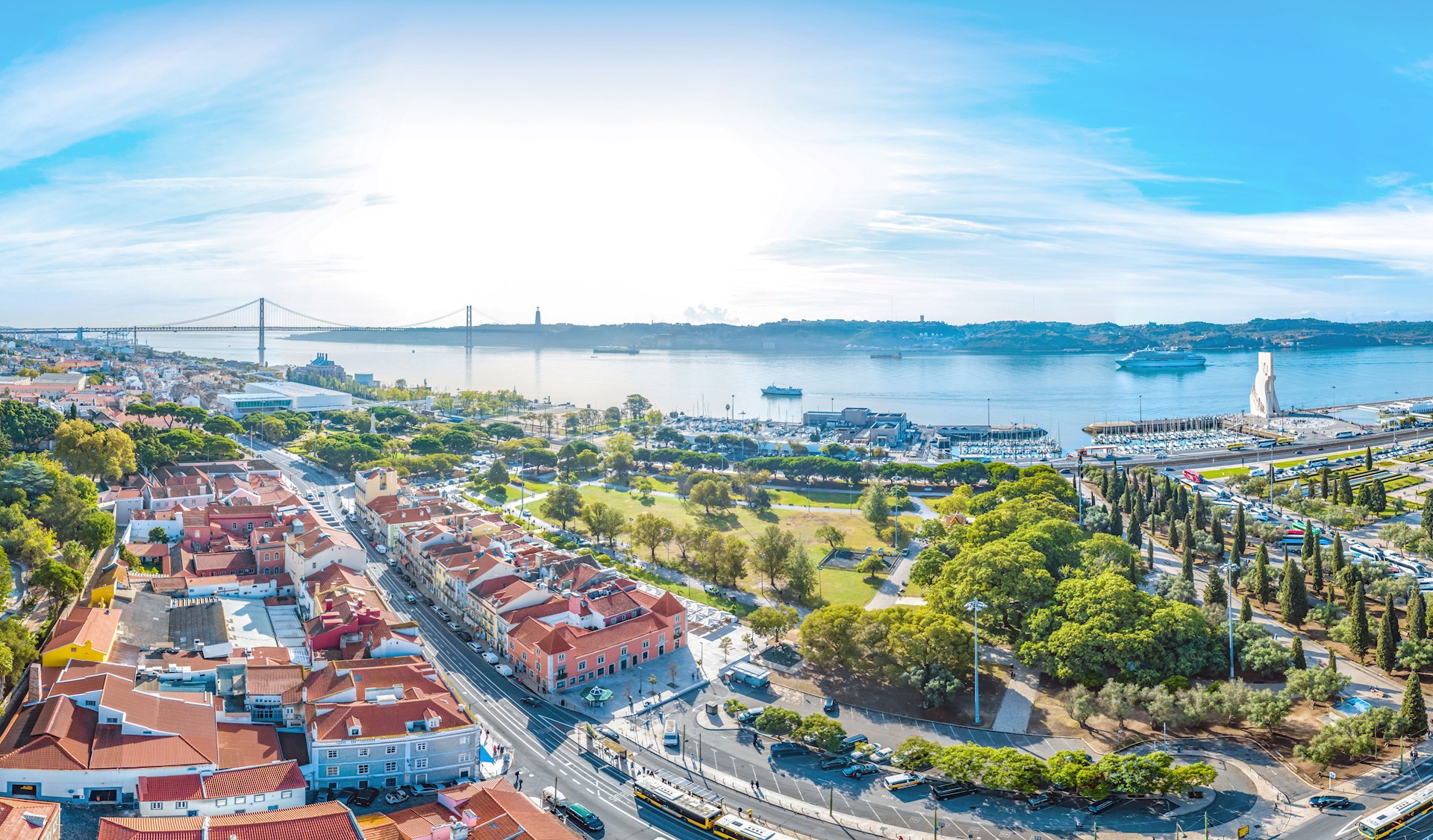 Perched on the hills of Lisbon, the 'miradouros' reveal each neighbourhood, all the lines that sketch out the city, rising up and gaining new colours, between cranes and scaffolding, every day. You can almost trace one axis that divides it in half, when you take the Avenida da Liberdade, the former Passeio Público (Public Promenade), as a reference.

On the one side, like a large wide-open window, is São Pedro de Alcântara, between the Chiado and Príncipe Real, with its back to Bairro Alto, as if shyly hiding the Bohemian life watching it every night, from door to door, from bar to bar. From there, fix your eyes on Graça, on the Castle, the Jardim do Torel, on the streets of Mouraria. And the Tagus, in the background, a static image, like a watercolour painting, in sharp contrast to the daytime rush. Right next to it, the Ascensor da Glória, a national monument since 2002, defaced by the scribbles of talentless artists - the difference between street art and vandalism - still seduces passing tourists and takes them halfway to the viewpoints on the other side of the avenue. Also on this side, between the streets of Chiado, the viewpoint Miradouro de Santa Catarina, best known for Adamastor, the symbol of the storms in the Os Lusiadas poems by Luís Vaz de Camões, represented in a statue facing the Tagus that made him famous. 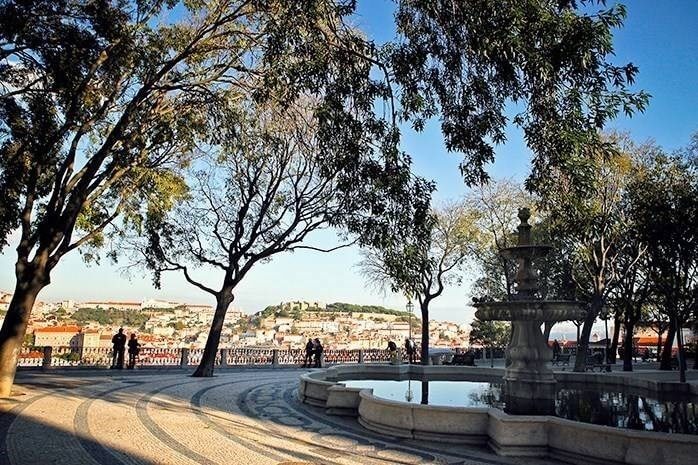 Cross the Avenida da Liberdade and head to the Lavra Elevator, the oldest in the city which opened in 1884 and continues to operate, going up and down between Largo da Anunciada and Rua Câmara Pestana, through Calçada do Lavra - also a national monument, similar to the Gloria (1885), Bica (1892) and Santa Justa (1902) lifts. You reach the Torel Garden, maybe the most discreet of the miradouros, tucked between small 18th and 19th century palaces. Originally, this was a farm whose land was ceded to the municipality in 1928 and retained the name of its owner. From here, you can discover western Lisbon and the neighbouring viewpoint of São Pedro de Alcântara opposite. The drinks kiosk, the café and the children's park are ideal for family days out. 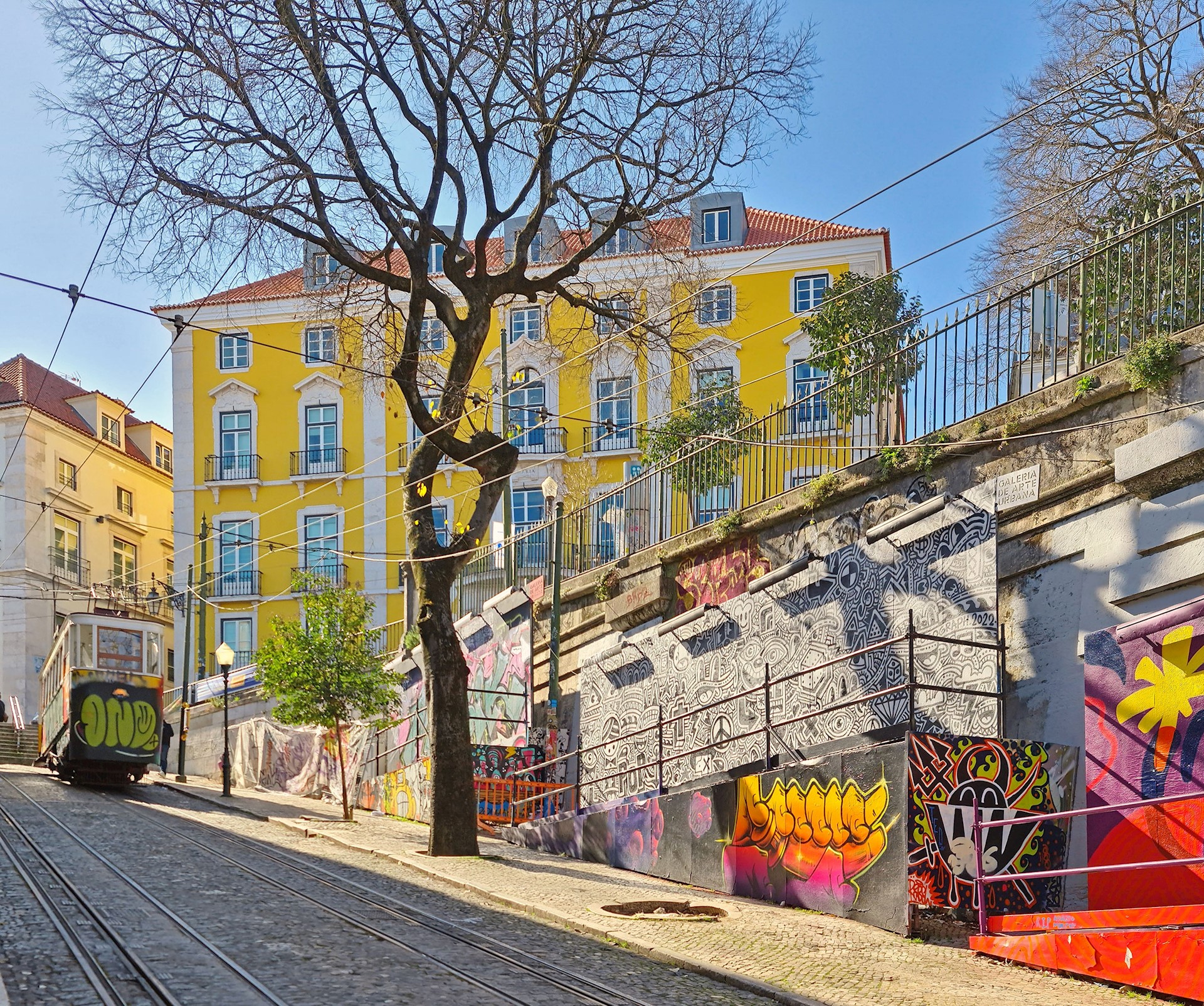 Not many Lisboners will know the name Miradouro Sophia de Mello Breyner, which is the official name of the well-known Miradouro da Graça. The bronze bust of one of Portugal's most important twentieth-century poets, the only female writer buried with honours in the National Pantheon, whose birth centenary is in November, echoes the memories of the times she gazed across the capital. Her words remain engraved there: "Em seu longo luzir de azul e rio/ Em seu corpo amontoado de colinas/ Vejo-a melhor porque a digo" (In its long glimmer of blue and sea/In its body mounted by hills/I see it better because I say it). And, on the highest hill, you can see the São Jorge Castle, the river, the Ponte 25 de Abril bridge, the cityscape, and then make out the Parque Florestal de Monsanto, the city's green lungs. Next to the promontory is the Graça Church and Convent, a twelfth-century architectural complex rebuilt in the sixteenth century and restored again after the 1755 earthquake. The convent became a military barracks after the abolition of religious orders. Inside, it retains an important set of traditional tiles from the sixteenth, seventeenth and eighteenth centuries. It has been transformed into a trendy neighbourhood, and is listed in all the guides, so it is increasingly a tourist spot with queues at the doorstep of small establishments, where you can still sample traditional food if you have the patience to wait... 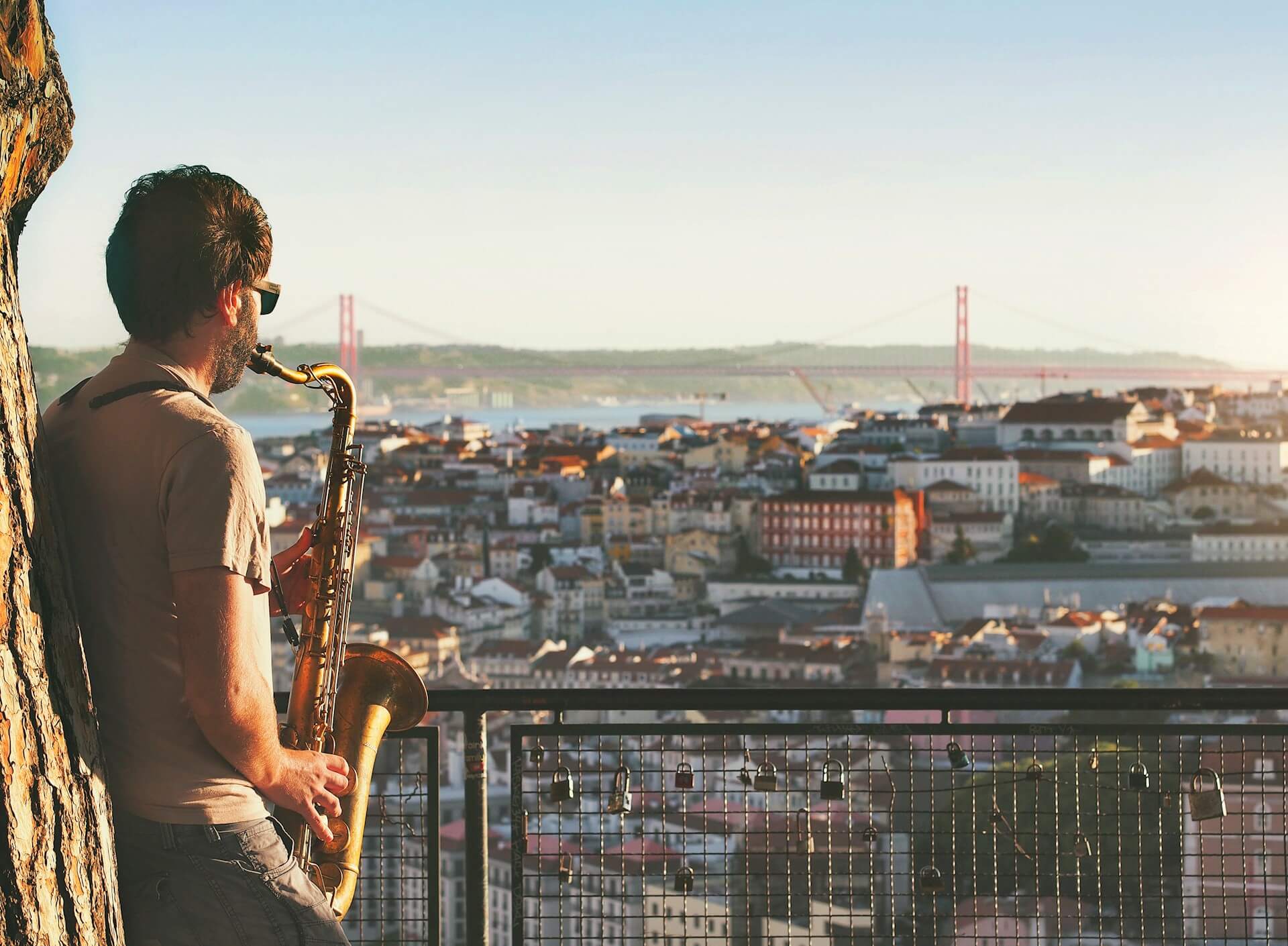 It is hard to say which is the best view - whether through Sophia's eyes, or from the Senhora do Monte, practically side by side, but a little higher up. The chapel of Nossa Senhora do Monte, in the heart of Graça, lends it her name. Half a dozen steps away is Vila Berta, built in the first half of the twentieth century and intended for working-class housing, named after the daughter of architect Joaquim Francisco Tojal, who designed it. It is a must-stop for the popular saints' nights, when it is filled with people dancing and roasting sardines. Back at the viewpoint with Lisbon at its feet, it makes for an amazing photograph, and everything fits through the lens.

Keep going down in the direction of the Castle, and you'll reach the Portas do Sol Viewpoint, in the Alfama neighbourhood. This is one of the most frequented tourist spots, with a hubbub of traffic and live music, the most romantic, with so many kisses exchanged on this terrace, overlooking the Tagus, like the bow of a ship. You can see the ships that enter at the Bugio Lighthouse and are anchored in Santa Apolónia, without losing sight of the dome of the Pantheon, and the church towers of Graça and São Vicente de Fora. The Museum of Decorative Arts in the Palácio Azurara is worth a visit. Continuing down the hill, following tram line 28, another picture postcard moment, you will reach Lisbon Cathedral, Santo António Church and the Baixa. Dozens of tuk-tuks lure passers-by, but if you're in the mood for exploration, slip on some comfortable footwear and walk down the narrow streets at your own pace, stopping for a "copo de três" (literally a glass of three: an expression used for a drink between meals, with or without a snack to go with it), a prayer, a souvenir or a selfie.

If 'miradouro' means 'high point with a wide horizon', you shouldn’t cross off another half a dozen strategic places in the city from your list. Down in the Baixa, a climb up the triumphal Rua Augusta Arch is another on the list. After the lift, and 46 spiral steps, you can look out over the perfect Pombaline square designed by the Marquês de Pombal with its perpendicular streets that retain the names of the craftsmen’s shops they contained - saddlers, blacksmiths, shoemakers - with Rua Augusta as its central axis extending out from Terreiro do Paço to Rossio and Praça da Figueira.

A few streets on, you'll find the queue to go up the Santa Justa or Carmo Elevator, one of the most notable examples of iron engineering in Portugal, neogothic in style, designed by Raul Mesnier de Ponsard; and wrongly attributed to Gustave Eiffel. Once you've endured the wait, you'll see where the lower and upper parts of the city connect, revealing from the terrace the ruins of the Carmo Convent, Rossio, the Castle...

During an afternoon at the shopping centre, head up to the Amoreiras 360 Panoramic View – if you're not out of breath yet, you soon will be. You won't run out of oxygen, though, as it will take you around thirty seconds to reach 174 metres above sea level. As the highest building in Lisbon, you can walk around it and enjoy a 360 degree panorama of the city or just sit and take in the views. You can follow the trail of all those who have been here on Instagram using the hashtag #amoreiras360view. The famous Lonely Planet guide assures that it is "the best view of Lisbon".

The list of viewpoints can be as long as your curiosity: the MAAT rooftop in Belém is an interesting place to hang out late afternoon; or climb up the dome of the National Pantheon or Santa Engrácia Church in the Santa Clara area, next to which is the picturesque Feira da Ladra flea market held on Tuesdays and Saturdays; and why not cross the river and go up to the National Sanctuary of Christ the King, located at the top of the Pragal area in Almada, where you can walk the Sacred Way of Jesus and enjoy sweeping views of Lisbon... 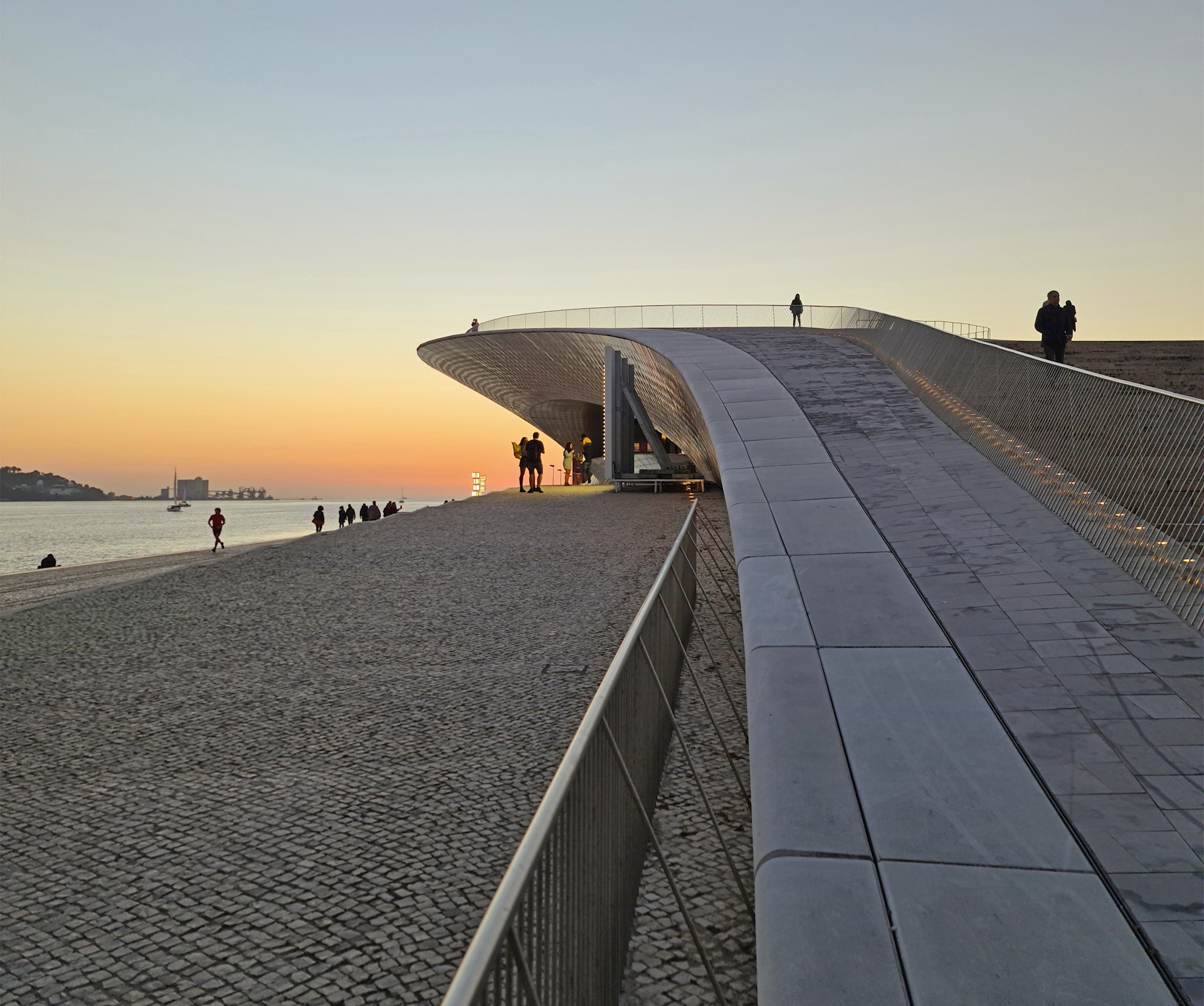 Save the best until last, or at least the viewpoint that requires the most courage - if you are afraid of heights, you might want to think twice! At Pillar 7, on the Ponte 25 de Abril bridge – called the Ponte de Salazar until the 1974 Revolution – accessed from the Avenida da Índia in Alcântara, you can find out about the history of this road and rail bridge, which connects Lisbon and Almada, on the south bank of the Tagus. Up until this point, it's pretty stress free. When you start going up and see the cables supporting it, your legs will start trembling from nerves. But it is when you step onto the suspended glass-covered balcony that fear may well set in. We are at the same level as the cars that cross the bridge towards the beaches of Costa da Caparica. You're advised not to look down, and to breathe deeply. Seen from here, Lisbon is dizzying, an illusion, a wonder, a challenge. So many emotions that arouse! But if I could, I would always be sitting by the aeroplane window, my favourite viewpoint, gazing at you from afar and approaching you with the urgency of lovers to hug you.

in your first direct booking at any hotel of the group.

Delicacies on show at Christmas in Portugal

Christmas is a time for joy, family and love and winter calls for dishes with substance and desserts that are sweet on the palate. ..

Are you counting the days to Christmas? How about making the most of the time and starting shopping and making preparations now? Making a calendar could help.

What to do in Madeira when it rains

Here are some suggestions of what to do in Madeira when it's raining.