The classics never go out of style
lisbon art trail . ..

There are places that never go out of fashion. They reinvent themselves with each new show, surprise you on every visit, supply you with unforgettable memories. How can you not be carried away by the emotions of live opera or ballet? How can you not admire the beauty of architectural form? The line-up changes every season, so there is no shortage of reasons not to return to the usual places.

Its dome imposes itself on the Lisbon skyline. One of the most important examples of Portuguese architecture from the second half of the 18th century, built in late Baroque style. There is a story behind its construction: when Princess Maria married her uncle, King Pedro III, she made a promise to build a convent for the Order of the Barefoot Carmelites after her first heir had been born. Once her wish was granted, work started in 1777 with Maria I now on the throne, although her first child died soon afterwards.

The Basilica was inaugurated in 1788. Among its many treasures are the figures on the façade alluding to the mystery of the Sacred Heart of Jesus, the painting of the Last Supper on the high altar by Pompeo Batoni, and the nativity scene with 500 figures in terracotta by Machado de Castro. This National Monument is the queen’s burial place. It is possible to go up to the roof terrace if you have enough breath to climb the 114 steps. From the top the view stretches all the way from the River Tagus to the Sintra mountains. Afterwards, you can stop for a rest in the romantic Estrela Gardens on the other side of the road.

A symbol to the memory of the earthquake that in 1755 devastated the capital, it was originally built in 1389 by General Nuno Alvares Pereira, who later entered the convent to dedicate himself to religion. Of the original building, the body of the church's nave was left open to the sky, creating an idyllic ruin which charms visitors. In 1836, the inhabited part was converted for military use, and the Carmo Barracks became one of the stages for the Carnation Revolution, on 25 April, 1974, which deposed the ‘New State’ dictatorship.
With the extinction of religious orders, it became home to the Archaeological Museum, with its mission to safeguard the national heritage. Important collections from various excavations were brought together here. The collection combines artefacts and works dating from prehistory to the contemporary period. Guided tours available. 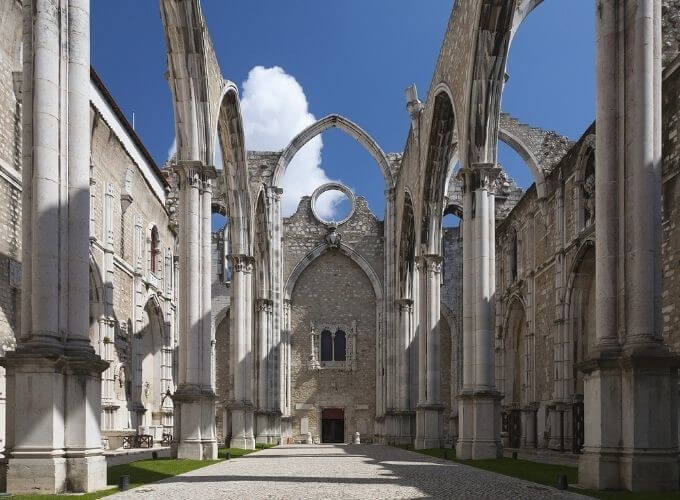 A tour around this museum is a journey back to the time of kings and queens by means of the vehicles they used - there are coaches and carriages for parades and processions from the 16th to the 19th centuries, most of them originally from the Portuguese Royal Household. It is considered one of the most remarkable collections of its kind, because it shows the technical evolution of horse-drawn transport and the decorative art of coaches up until the arrival of the motor car. The original building dates back to 1905, but since 2015 it has been housed in new facilities, which have extended the exhibition space and made it one of the most popular museums in the country.

In an area of Lisbon dotted with historical monuments, this was one of the most controversial examples of architecture in the city at the time it was built. Designed to host the Portuguese Presidency of the European Union in 1992, and later becoming a cultural attraction in its own right, it was built on the site of the Portuguese World Exhibition which took place in 1940. The complex was designed by architect Manuel Salgado and includes the exhibition centre, a live performance venue and the conference centre, as well as several outdoor areas. Since 2007, it has also housed the Berardo Collection of design and modern art. The city’s cultural offering changed with the opening of the CCB and its programme reflects the significance the centre has attained in bringing artists to prominence, especially in the worlds of music and dance. There are also programmes for the whole family and activities at weekends.

When the earthquake spread panic in Lisbon, the area of low seismic activity around Belém and Ajuda was the least affected by the catastrophe. The royal family survived, but King José I was not safe in the limestone buildings that he saw collapse. In search of a safer residence, he had a palace built of wood to better resist future tremors. The new palace served as the residence of the court in successive reigns until the Foundation of the Republic and the consequent exile of the royal family to Brazil, when it was closed. It reopened its doors to the public in 1968, and recreates the original interiors and collections - gold, jewellery, textiles, furniture, glass and ceramics, as well as collections of paintings, engravings, sculpture and photography - based on rigorous historical research into the Royal House from the late eighteenth century, which makes this one of the most unique collections of decorative arts in the country. For security and conservation purposes, many pieces are only displayed in temporary exhibitions. A National Monument, this is the residence chosen for many official ceremonies. It is worth dusting off the past and getting to know the Palace. 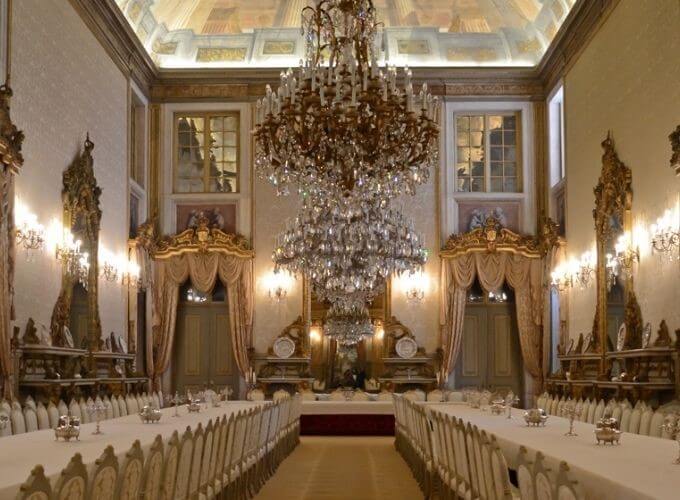 This is the legacy left by businessman, art collector and philanthropist Calouste Sarkis Gulbenkian (1869-1955), an Armenian who was born in the former Ottoman Empire. He lived in the Portuguese capital during the last years of his life and decided to leave a foundation here that would serve humanity. The Foundation is dedicated to artistic, scientific and educational activities. Since 1956 it has been home to the Museum containing its patron’s personal collection, consisting of six thousand pieces of different styles and eras, including Egyptian, Greco-Roman and Islamic art and a collection of René Lalique, the French master glass designer and jeweller. The Modern Art Centre (CAM) completes the collection with works from the 20th and 21st centuries. It also hosts the Gulbenkian Orchestra Choir, an art library, temporary exhibitions, conferences and an extensive musical programme. Outside, the garden designed by landscape architects António Viana Barreto and Gonçalo Ribeiro Telles is perfect for a stroll or to sit and read in one of its many leafy corners. The Gulbenkian's cafeteria and restaurant have an impressive range of food and you can also purchase museum souvenirs and books in the main building and CAM stores. 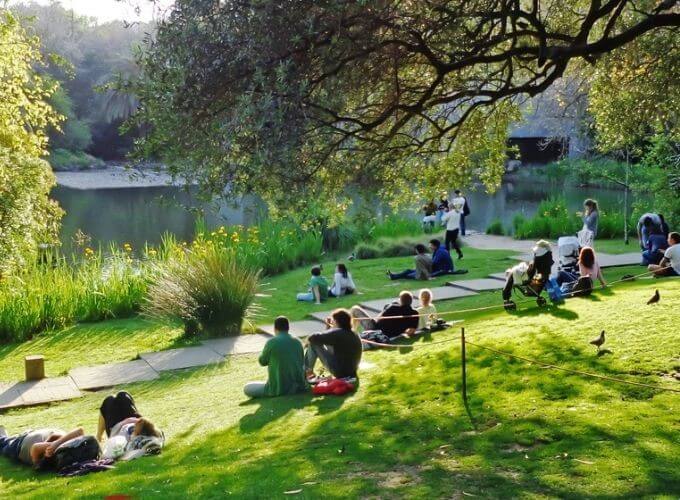 Here the operatic masterpieces of the great composers are sung, and choral symphony concerts are staged. This iconic concert hall, inaugurated on 30 June, 1793, remains the only venue in Lisbon specifically for opera performances and has a regular programme in three different spaces - the main hall, the noble hall and the foyer. At the end of every season, it holds the Festival ao Largo, a celebration of music and the performing arts for one month in the square outside, with free access to all. As a Member of the European Route of Historic Theatres, it organises guided tours, by prior reservation, which offers a great opportunity to have a look backstage.

This is a little like a journey underground, as you pass between two buildings of different eras, one from the eighteenth century and the other a fine example of late 19th century industrial architecture, formerly a printing works and handbag factory. But 220 years ago, one of the most important monuments of ancient Olisipo, an important port in the Roman province of Lusitania, was discovered here. In 1798, with the Pombaline reconstruction of post-earthquake Lisbon, a theatre built at the time of the Emperor Augustus was uncovered, having remained buried since the fourth century AD. With its exhibition area and archaeological centre, you can see a fine collection of Roman archaeological remains here including capitals, columns, sculptures, epigraphy and ceramics. 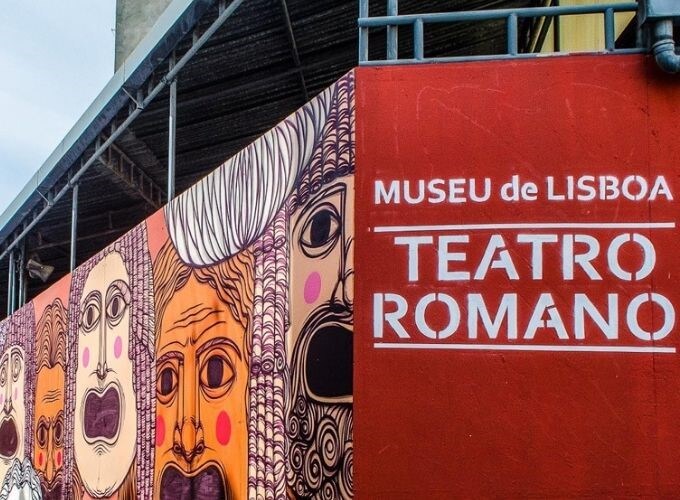 These are the lungs of the city. They were laid out in the middle of the nineteenth century as a scientific garden for the purposes of teaching and research in Botany at the Polytechnic School, on the initiative of the Count of Ficalho and Andrade Corvo, teachers at this educational establishment. The first gardeners collected a wide range of plants from every part of the world in which there were Portuguese sovereign territories. The soil here was fertile and the species took full advantage, which soon made this a green refuge in the centre of the city. The wealth of tropical species from New Zealand, Australia, China, Japan and South America testifies to the amenable Lisbon climate and the uniqueness of the microclimates it has created. Some of the collections are unique, such as the palm trees which come from every continent, or the cycads, a particular feature of the gardens. Here, like a concert hall, the changing seasons bring their own diversity, colour and sounds, accompanied by the arrival of birds and the play of light and shadow during the course of the day.

‘I know not what tomorrow will bring’, wrote Fernando Pessoa (1888-1935), in pencil, on the eve of his death; his final words. Likewise, we never know what tomorrow will bring because many of the works of the greatest figure in Portuguese literature are yet to be published. He wrote compulsively from childhood and kept almost everything he produced. There was a trunk, where he deposited more than 25,000 pages of poetry, short stories, literary criticism, translations, single texts, astrological letters, typed or handwritten in Portuguese, English and French. He wrote under different names, as if many different people lived within him, and called them heteronyms, the best known being Alberto Caeiro, Ricardo Reis, Álvaro de Campos and the semi-heteronym Bernardo Soares. His estate is shared between the National Library and the house where he lived for the last fifteen years of his life, today dedicated to his life and work. You can still see some of his original furniture, objects and personal documents. It is a unique place to meet the man and the author, if in fact it is possible to separate the two. The events programme includes reading clubs, workshops, guided tours, book presentations and concerts. A ‘restlessness’ well suited to those who admire the writer. To complete this series of classics, take a look at the book ‘Lisbon - What the Tourist Should See’ (Horizon Books), a tourist guide written by Pessoa himself, with which you can explore the basics of the city's heritage.

L’Hotel PortoBay São Paulo welcomes and receives its guests with a selection of chocolate truffles (brigadeiros) in their room on arrival . ..

Carla Badim and the food & beverage team at PortoBay Flores