1st swim of the year
Starting the year off right means starting off the year in the sea! The first swim of the year is an important moment that occurs all over the world, and Madeira is no exception. Many Madeirans at various places on the island perform this ritual, which has become rooted in Madeira's culture.
This tradition gave rise to the Madeira Plunge, an event where people pay a token €2 to enter, which is then all given to charity.

Sweeping out the cupboards
After Christmas and Singing the Three Kings, the festivities come to an end and it's time to "sweep out the cupboards". On 15 January, Saint Amaro is celebrated and that is when Madeirans officially end their Christmas celebrations. They take down their nativity scene, put the decorations away and enjoy the last delicacies of the festive season. 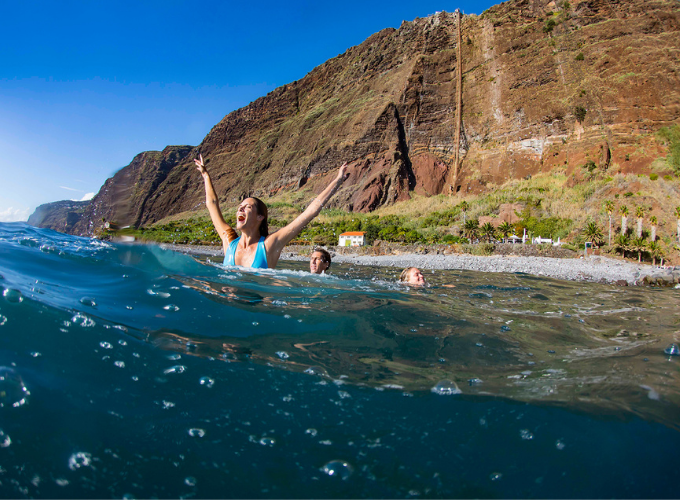 This season is also very lively on the island: Carnival in Madeira has an extravagant parade that makes anyone passing through here very happy! This tradition dates back to the 19th century and some historians believe it may have influenced the Carnival in Brazil!
On Carnival Tuesday, creativity, humour and social and political satire come together for the typical Cortejo Trapalhão parade, with participation open to all!

And if there's one tradition that all Madeiran households keep at this time of year, it is to fry batter to make malassadas or sonhos. Malassadas are made from flour, milk and eggs and are typically accompanied with sugar cane honey; they are denser and more consistent than sonhos, which tend to be lighter and less filling. 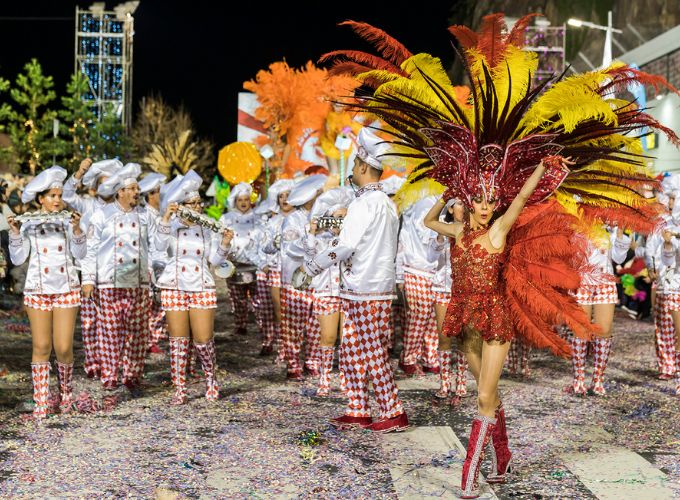 Lent
After Carnival, the preparation for Easter begins. With the arrival of Lent, Madeiran families observe a day of abstinence and cannot eat meat during the following seven Fridays.

Balamento
8 to 10 days before Easter it's time to play Balamento. This Madeiran game is very simple: the first person to say ‘balamento’ during the game wins! At the end, the loser gives the winner an Easter egg, almonds, sugar lumps or some other sweet.
How about trying it at home? 😉

Receiving the Divine Holy Spirit at home
Religion is the main topic at this time of year, but in Madeira even more so. The devotion to the Holy Spirit comes from a popular belief from the 14th century and has been maintained ever since.
After Easter Sunday, houses must be cleaned, just as well as or better than at Christmas, because it is time to receive the Holy Spirit. Madeiran families open the doors of their homes to welcome the Holy Spirit and if there is one thing that cannot be missing for this reception besides the gifts, it is food and drink: liqueurs, wine, family cake, etc.
The small entourage accompanying the priest includes musicians, who sing and entertain in Madeirans' homes while blessing the house and praying with families.

Flower Festival*
Is there a more flower-filled season than this? Hmm . .. probably not !!
It is traditional in Madeira to pay tribute to spring and the flowers that so beautifully adorn our island and fill it with colour. Throughout the month of May various cultural and traditional activities take place, such as folklore performances, floral carpets and other shows.
On the first Sunday, people celebrate with the Cortejo Alegórico parade. This is the most eagerly-awaited moment and fills downtown Funchal with music, colour and a parade of various floral species, represented in the costumes and floats of the Flower Festival.

Wall of Hope
As tradition dictates, on Saturday morning families take their children to the "Wall of Hope", where they each place a flower and symbolically call for peace. Can we count on you?

*The Flower Festival is a moveable event and can also take place in April. 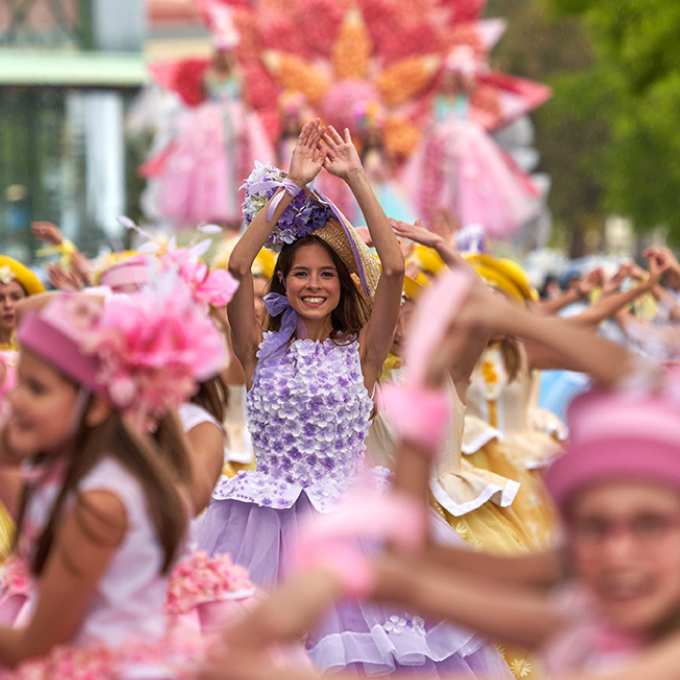 Popular Saints
You must have realized by now that Madeira is a land of celebration and any excuse is an excellent reason to celebrate. Well, the Popular Saints are no exception.
From 12 to 13 June, Saint Anthony is celebrated in the parish named after him with a traditional parade and the enthusiasm that is so characteristic of the Madeiran people.
St John (23 to 25 June) is widely celebrated in several parts of the island, especially in Caniço, Santa Cruz, where besides the usual food and drinks, the party includes a dip in the sea at midnight for the bravest.
From 28 to 29 June in Ribeira Brava and Câmara de Lobos, St Peter is celebrated with real energy and a typical party atmosphere.

Street Parties
It is the Popular Saints that provide the backdrop for the street party season in Madeira, a festive period much appreciated by all. The streets are decorated with strings of lights, colourful paper flowers, flags and little stalls.
Madeira's street parties are also about folk music and eating meat cooked on skewers. Bolo do caco bread is another Madeiran delicacy that you can try at these festivals, and of course you’re sure to drink poncha, made from sugarcane spirit, or wine mixed with orangeade.
You will also find candy necklaces and marzipan dolls, all traditional products at these festivals that take place during the summer months all over the island.

Threshing the Wheat
Growing wheat has always been part of the island's existence, but harvesting the grain was an arduous task. To make this moment lighter, songs were sung, a tradition that still remains in Prazeres, Calheta. 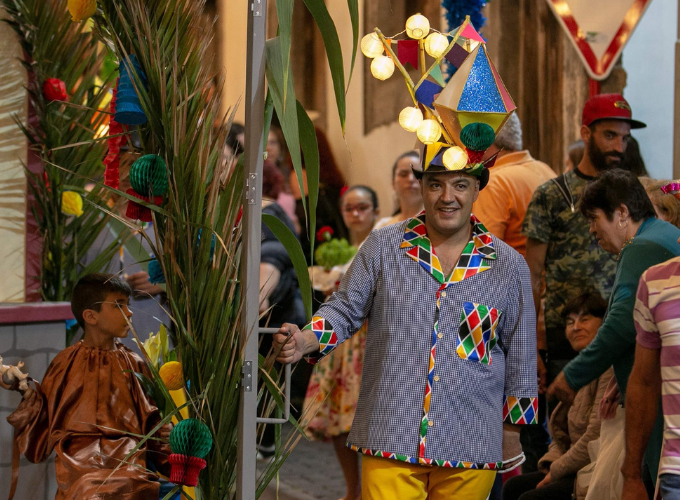 Wine/ grape harvest
Did you know that Independence Day in the United States was toasted with Madeira wine?
The grapes that go into this very special wine are harvested at the end of August and during the month of September. The grape harvest is celebrated all over the island . ... the grapes are trodden in tanks and there are traditional parades, folk music and regional wine tastings. 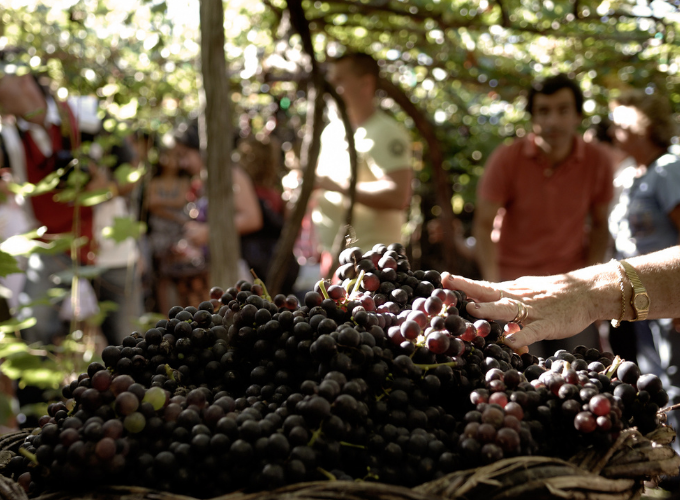 Bread for God
This tradition was linked to the Day of the Dead and to the cult of souls, which represented the deceased; the poor asked for Bread for God and received seasonal bread and fruit.
The "Bread for God" tradition has now been abandoned and Halloween has gained in popularity among the Madeiran population, especially children. Nevertheless, it is customary in schools for children to decorate cloth bags with autumnal motifs such as fruit and nuts. On 30 or 31 October, children go from door to door, just like on Halloween, to ask for "Bread for God" and receive sweets, nuts and other treats.

Christmas
If there is one occasion that is common to all Madeirans, it is Christmas. Lights, lights and more lights; this is how the streets of Funchal, and streets all over the island look. The houses are filled with decorations, nativity scenes are set up and the season's delicacies begin to be prepared.
For the nativity scene, or lapinha as many call it, wheat seedlings are needed. These are placed into small pots as a decoration that, according to popular belief, helps bless the crops on the island.

Childbirth Masses
In Madeira, Christmas starts with the Childbirth Masses. This tradition, despite the early hour (they are held around 6 a.m.), is always very popular, both the religious and pagan part. These masses take place in every parish on the island, nine days before Christmas. Each day represents one month of the Virgin Mary's pregnancy.

Traditional flavours
There's no Christmas without making broa biscuits and honey cake. If you welcome someone into your home at Christmas time, you have to give them a taste not only of the types of broas you’ve made, but also of a typical liqueur.
Tangerine liqueur, passion fruit liqueur and many other flavours are part of the rich tasting experience the island offers at Christmas time. And of course not forgetting the hot cocoa as you leave the childbirth mass or maybe some chicken broth. On our YouTube channel you can learn how to make many of these delicacies, here.

Market Night
This is a very special night and the atmosphere shows it. Music, joy and conviviality perfectly describe the night when people go to the Lavradores Market in Funchal to listen to traditional songs and do some last minute shopping for Christmas Eve. On Market Night the surrounding streets are filled with entertainers, traditional seasonal food such as meat sandwiches with wine and garlic, and the typical poncha which is never in short supply. Without a doubt a night not to be missed.

New Year's Eve – a memorable party
Considered one of the best firework shows in the world, coming to Madeira to celebrate New Year's Eve is a great way to end the year. New Year's Eve is experienced with great joy out in the streets. All over the city and especially in Funchal Bay residents and tourists gather to enjoy the magic of this colourful spectacle.
Fancy dress? Check!
12 raisins? Check!
Champagne or sparkling wine? Check!
And that’s all you need . .. to see in the New Year together with your batteries recharged! 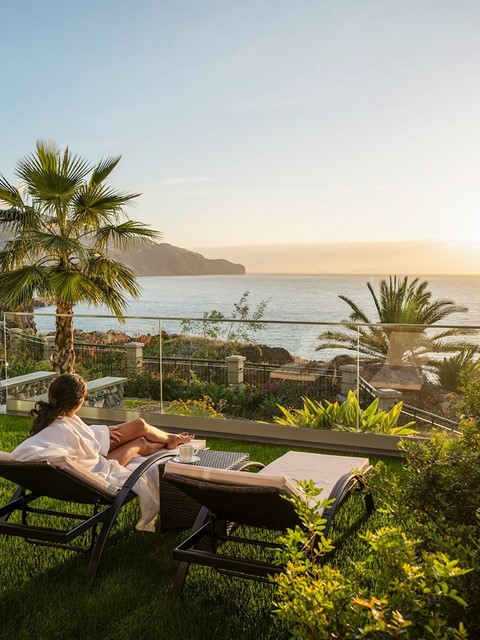 Have you ever felt the experience of being in a place, where all the elements around you magically combine, together, in perfect harmony ?

15 delicacies from Madeira not to be missed

5 walks you can’t miss in Madeira

Madeira is an island of many walks. There are trips to the seashore, mountains, flower gardens, pebble beaches, forests and levadas.