Whether it’s the vibration of the engine, the design or the restoration, the passion for vintage cars is shared by many. And in Madeira, classic cars are most often popular models with a high level of restoration.

If he had to choose one dream car, the sculptor Ricardo Veloza would not hesitate: a Bugatti Type 35, the racing machine introduced in 1924 which even today is still one of the most appreciated vintage cars in the world.

Another model that this Madeira-born artist picks out is paradoxically quite different: a Land Rover, "a prime example of design applied to a machine. A car made to work" one that despite the passing years "still works".

Ricardo Veloza doesn't know when his passion for vintage cars started. But as far back as he can remember "vintage cars meant a lot to me". The interest grew with time and became "in a way, a small part of my life".

His artistic streak soon became apparent and he went on to design car models. "It was always an area to which I dedicated myself", he explains since, as a result of his work as a sculptor and designer, he has spent "a lifetime designing posters and logos and car paintings", especially of rally cars.

The drawings have been collected in a book entitled "The automobile art of Ricardo Veloza", a compilation put together by Eduardo Jesus, currently regional secretary of Tourism and Culture of Madeira and also an enthusiast for classic and vintage cars.

It was also Eduardo Jesus who took up the challenge of researching the history of the first car to be driven in Madeira, a 10 h.p. Wolseley, brought to the island on 21 January, 1904, by the British businessman Harvey Foster. As he was planning to stay the winter there, he didn't want to forgo the pleasure of driving.

The "10-horsepower invader", as the machine became known, had a series of incidents in Madeira, but it marked the beginning of the history of the automobile on the island; over the following decades thousands more cars would arrive. Many of them ended up surviving to the present day.

There is no certainty as to the number of existing classic and vintage cars in Madeira. Between more recent and older models, the number may very well reach four thousand, as some affirm, or 1,500 to 2,000 according to António Martins, president of the Classic Car Club of Madeira. It all depends on the criteria used and the state of repair of the vehicles. To be considered, they must have a certificate of historical interest, which classifies the car as being original, and must be at least 30 years old.

The number is significant. But the importance of these cars comes above all from their state of repair and restoration. Eduardo Jesus notes that this is what most impresses people who visit Madeira: "There is great surprise in discovering that Madeira has a heritage as extensive as this". Visitors are “amazed how there are so many old, well preserved cars on such a small island, in the middle of the Atlantic."

Everyone seems to agree on the high quality of the restoration work done in Madeira. Eduardo Jesus stresses that "the vast majority of cars are restored from A to Z here in Madeira". This means having "mechanics to match, panel beaters, painters, electricians, upholsterers", people that "have this ability to work with the older cars".

Ricardo Veloza is one of the car buffs who gets down to work. "I help restore, but I have people I know who do a very good job”. The sculptor is sorry that the potential of artisans who dedicate themselves to restoration is not exploited more.

Parts are needed for successful restoration. The ease of finding them varies depending on the make and model. Eduardo Jesus points out that the necessary parts have started to be manufactured locally.

The world of vintage and classic cars in Madeira has several origins, says Eduardo Jesus. "There was, at one time, in the 1980s, a tendency for people to buy cars abroad and many good cars were imported into Madeira. But the truth is that the vast majority of classic cars we have are from here. They were cars that circulated in Madeira, and were connected to various families, they had a sentimental value; because they belonged to someone’s father, mother, grandfather or uncle, the current owners are restoring, cherishing and preserving them. And the truth is that most of them are popular cars rather than rare ones."

The expression "popular cars" is also used by António Martins, President of the Classic Car Club of Madeira, to describe Madeira's stock of antique vehicles. "We don't have the supercars or the big models, but we do have the popular cars which are excellently restored.”

Ricardo Veloza points out that although the stock of cars does not have "brands like you see abroad", it does contain some outstanding cars. Some Rolls Royce, Bentleys, some Jaguars, Porsches or special Mercedes. But mostly there are the more common cars, like Volkswagen, BMW, Austin, Morris, Fiat or Volvo.

Ricardo Veloza points out that "sometimes there are popular cars where the owners go in for a higher level of restoration", which contributes a lot to the uniqueness of Madeira's cars.

This fact is noted by Eduardo Jesus - the desire of the owners in wanting to keep their cars in good condition, always waxed and improved, which also contributes to Madeira's image.

The excellent restorations have turned Madeira's car fleet into a "desirable market", where some cars "left the exhibitions we held in various parts of the world” because they were acquired by collectors, says António Martins. In Australia, United States, Japan, United Arab Emirates, several European countries and even in African countries there are vintage and classic cars that once belonged in Madeira.

Events such as exhibitions and rallies are a way of publicising this heritage. Every year the Madeira Classic Car Revival, held at the same time as the Flower Festival, brings together around 500 vintage vehicles. But there are also sporting trials and other reasons for the cars to come out of their garages. There are several classic car clubs, some of them dedicated to a specific make or model, such as the Beetle Club of Madeira, dedicated to the iconic Volkswagen model.

"Some events held here in Madeira bring together all the clubs and existing associations", says Eduardo Jesus, which is important because it allows Madeira to "do things on a different scale", that attracts outside attention. 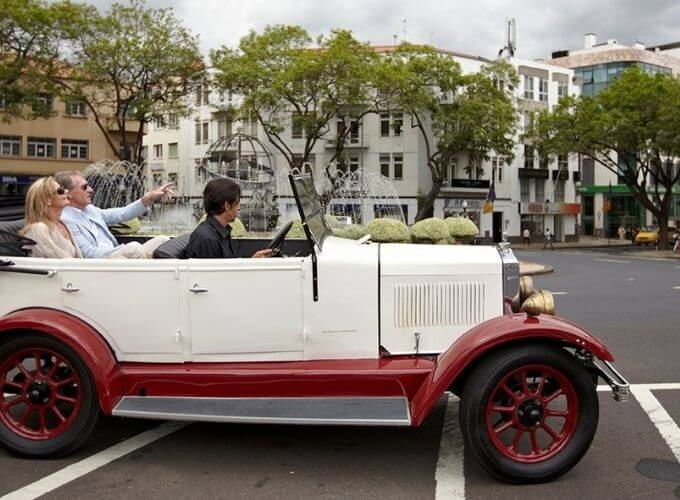 But passion is what drives these car owners. It's not just about maintenance and upkeep. It's also the pleasure of driving. "A car from the 1940s or 50s bears no comparison to today's cars," says Ricardo Veloza. "And that's one of the things that fascinates me, how cars have changed over the years”.

Eduardo Jesus admits that driving these cars "is a unique feeling because it is a journey back in time". It takes more skill and more physical dexterity, as there are none of the automated features you find in today’s cars. "I really enjoy driving different cars, because each one has its own logic in the steering, or in the gearbox", or discovering "the secrets of a certain engine". This classic enthusiast talks about feeling the vibration of the car, and is in no doubt that the old engines "have another kind of freedom compared to today’s ones."

"This connection between man and machine is more fascinating for that experience and becomes richer depending on the chances you get to drive different cars," he says.

The way Ricardo Veloza relates to cars has also changed over time: "there was a time when my dream was to take an old, damaged car and restore it to immaculate condition. And nowadays, with the passing of the years and the experience I have, my dream is to have an original car, one that has not been touched". A dream he has partly achieved, because of all the cars he owns, the Rolls Royce, "is original". It will be 100 years old in 2028. "When I ride in the car I try to imagine the stories that that car will have experienced".

There are no great collectors of classic and vintage cars in Madeira. But there are many people who have one or two of these cars. The owners with the most cars have about 30. Some have between 10 and 20.

And this type of car fleet is "a way of differentiating Madeira in relation to other tourist destinations; for having this diversity and this number of cars, and in the state of repair they are in", says Eduardo Jesus, for whom "each owner of a classic car is, without a doubt, someone who is preserving Madeira’s heritage." There is a sentimental relationship with cars.

And there are so many occasions throughout the year, especially at weekends, when you can see these authentic time travellers at the wheel of their cars, with so many stories to tell. 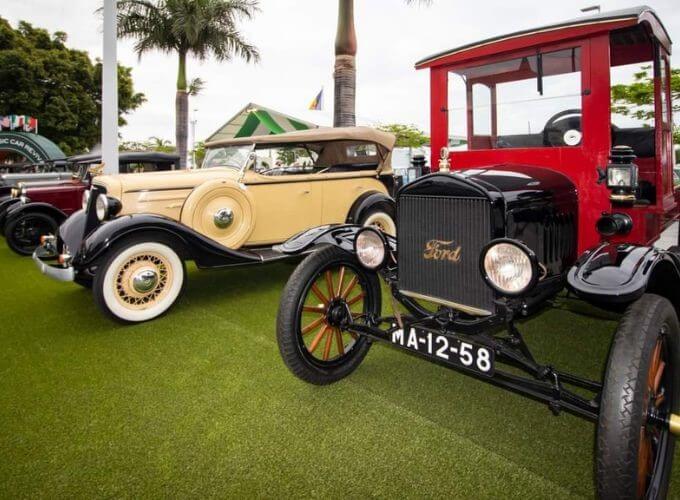